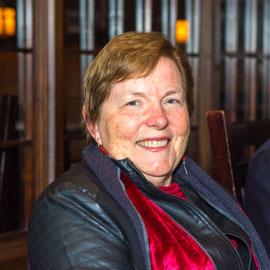 Elizabeth (aka Buffy in her earlier years) has been a paraplegic for fifty years. She was injured at seventeen in a fall. She has spent much of her adult life involved in disability advocacy work including various non-profit boards. She was on the board of the no longer active American Coalition of Citizens with Disabilities. In the late 60’s and early 70’s she was active in wheelchair athletics (field events) and traveled internationally. She won a silver medal in the Paralympics in Germany in 1972.

Her early career was in higher education where she was a counselor with deaf students at California State University Northridge and administered a support services program for students with all disabilities in the Dallas County Community Colleges. Later, she became involved in government where she was selected as a White House Fellow, was the Deputy Director of the United Nations International Year of Disabled Persons and worked on the White House Office of Science and Technology Policy under President Carter on Spinal Cord Injury policy. In the 80’s, she worked at General Mills in Public Policy and Market Research. She left General Mills to become a consultant in qualitative market research and organizational consulting and worked through 2008 with both profit and non-profit companies and organizations in the Twin Cities.

Currently, Elizabeth’s main interest is writing. She is pursuing a Master of Fine Arts from Vermont College of Fine Arts in Creative Non-Fiction and hopes to write a series of personal essays. She lives with her college-age son, housemate and large golden lab in Park CIty, UT.